We are prophets of a future not our own. 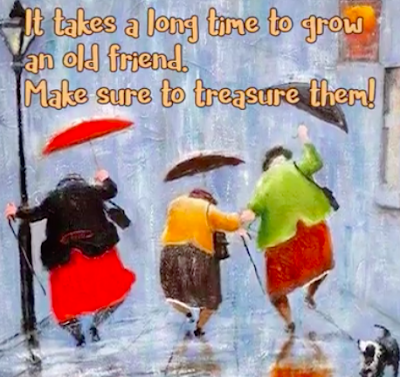 I wish I could give the artist credit above but the little sketch appeared on Facebook awhile back with no clue to as to it's painter.  I liked it and I think it is well to post it on New Year's eve.

I looked up the origin of the first of January as a starting point for the year and it is credited to Julius Caesar who re-arranged the calendar to accommodate it.  I never liked his choice.  Every teacher knows that September 1 is the beginning of the new year.

But tradition wins and so here we are looking back at 2017.  Everyone will have something to say about it.  Anne Lamott, one of my favorite writers,  put out a column on her Facebook recently sending comfort to those who are starting their diets AGAIN.
And we all know about those dratted "resolutions" we are supposed to be making.

Many many of us found this past year to be a huge disappointment.
Not in the living and loving of our own, of course, but in the government and the tragedies of violence and weather.  Many times through the past year I've need to re-group and re-dedicate and re-think and re-shape and in some cases re-linquish.  As an optimistic person by nature I've had to cling to hope and prayer more than ever.

As the year draws to a close, a prayer by Archbishop Oscar Romero of El Salvador, written shortly before his assassination in 1980, offers this insight:"It helps now and then, to step back and take the long view. The kingdom is not only beyond our efforts, it is even beyond our vision. We accomplish in our lifetime only a tiny fraction of the magnificent enterprise that is God's work. Nothing we do is complete, which is another way of saying that the kingdom always lies beyond us."We plant the seeds that one day will grow," Romero continued. "We lay foundations that will need further development."We cannot do everything, and there is a sense of liberation in realizing that. This enables us to do something, and to do it very well. It may be incomplete, but it is a beginning . . . an opportunity for the Lord's grace to enter and do the rest."We may never see the end results," Romero concluded, "but that is the difference between the master builder and the worker. We are workers, not master builders; ministers, not messiahs. We are prophets of a future not our own. Amen."

With that hope and thought in our hearts let us set out to do what we can letting God's grace enter in and do the rest.  Happy New Year.

Posted by Ginny Stiles at 6:22 AM No comments:

A Challenge for Square One 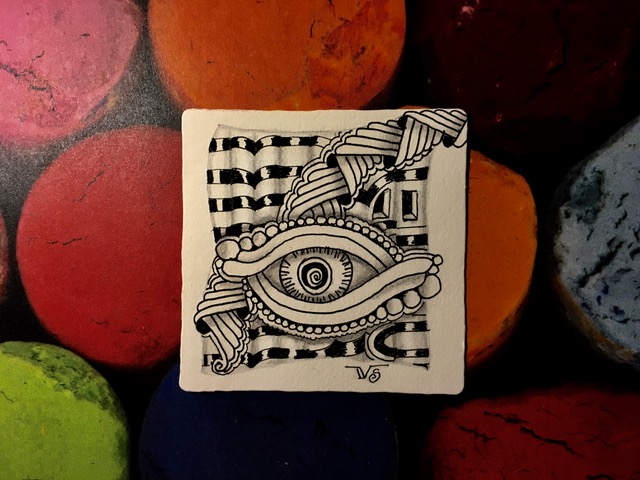 This is a combination of 3 different tangles: Organic, Dragon Eye, and Krinkle. I also used the new bold PN Micron Pen for this.

Done on 3.5 square tile it is my offering for the weekly challenge on the Facebook group called Square One.  As in "back to square one".  All entries must be black, white, and gray.  No color to be added and all must be abstract (no bunnies or elephants please).

In other words exactly how the founders intended them.  I must add, however, that Maria and Rick DO embellish their tiles by using gold ink and bits of color now and then.  They use white and brown pens on various color tiles as well.

But the founder of this Square One group decided to challenge the members do see how they can come up with beautiful and authentic work using the basics.  AND it is impressive.

I love looking at what folks come up with!  Amazing.

It is time to welcome in the New Year.
And much of the country is gripped in a terrible freeze.
Temps are dangerous in many parts of the country.
Central FL is going to be only a high of mid 50s all week.
(For us that is cold.). But at least no ice or snow.
And I hear that the flu is becoming epidemic now...I suppose we all shared our germs over the holiday?

So I do make the wish that all be safe over the holiday and decide to celebrate in warm easy-to-get-to places.  Also wishing you elude the flu please.  And that your resolutions are gentle.

Hoping that making more art will be one of them.  It's one of mine!
Happy New Year.


Posted by Ginny Stiles at 9:24 PM No comments:

A short visit to Beaufort, SC 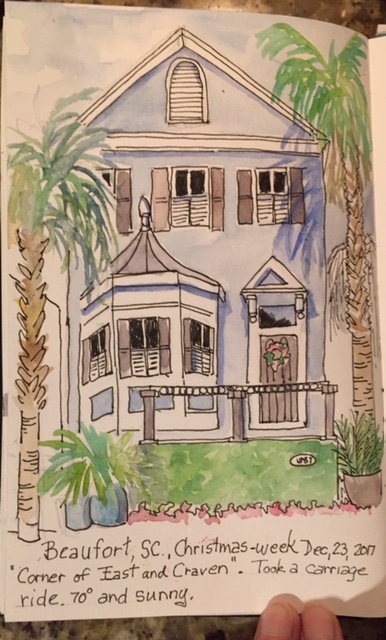 A stop in Beaufort, South Carolina on our way to visit my sister in York, SC was an excellent idea.  An old and beautiful little southern island town filled with pre-Civil war historical houses and lots of interesting history.  One long afternoon was NOT enough to even dip our toes into the ambiance of the place.  We hit town last Friday and Saturday and the temps held about 72 and sunny.  A lucky time as the current cold front had not come down yet.   We took the nice buggy tour and really want to come back soon. 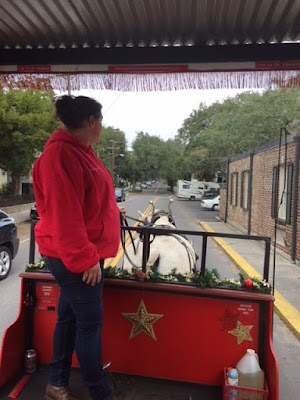 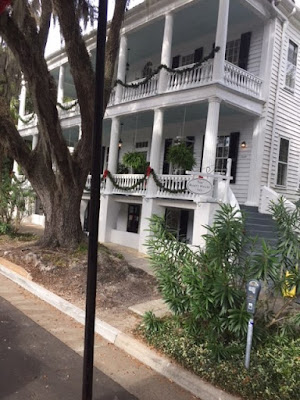 Posted by Ginny Stiles at 7:38 AM No comments:

A Little Bit of Art 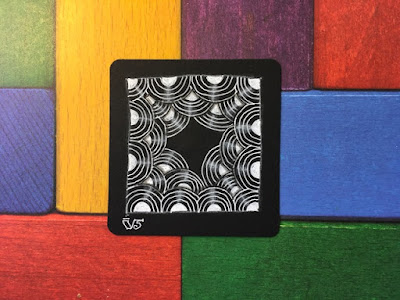 Like so many Zentangle fans I've been following Rick and Maria's blogs during the holidays.  This is one of the very simple but elegant tangles that Rick drew.  (Rick and Maria are the founders of Zentangle®.). Watching these so accomplished tangle makers is such a privilege.  So this is just a lovely version of Crescent Moon that most of us teach our beginning students.  Rick did his with white pens of different sizes so that the center crescents were thinner.  I didn't have 3 sizes.  So I did the best I could.  I still like the effect.  (And if you've been following along you'll know that I enclose these in birthday cards!) 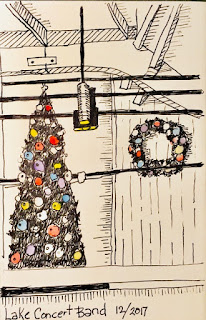 Just a tiny little sketch I did during the band concert at Hawthorne Park last Sunday afternoon.  The tree and wreath were actually up above our heads and above the stage so therefore close to the lights on the ceiling.

We leave for SC today and am taking some sketching materials along with me.  So hope to post during the week sometime.

Posted by Ginny Stiles at 7:40 AM No comments: 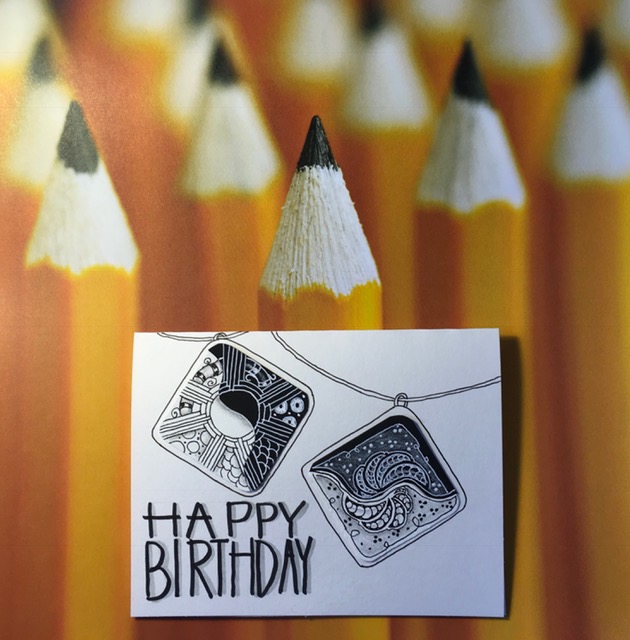 It is time now (even though it's Christmas) to make up a few birthday cards.  And since the founders of Zentangle® (Rick and Marie) are gifting us all with 12 different ideas about tangles, I thought it might be fun to combine these events.

This is a standard 4x6 blank greeting card onto which I have glued two Bejou tiles (2.5 square).  So they are pretty small.

The black/white background for the tiles was made by cutting a black tiles and a white tile at the same time and then piecing them back together.  Ying/Yang style.

The tiles were then tangled with a PN black Micron pen and a #8 white jelly roll pen.

I am also packing up some gelli print supplies to take with me to my sister's in SC AND putting together some of my sketching supplies in hopes I'll get a few sketches done while I am off traveling next week.   I am itching to get back sketching again!!!

I love all the lights at Christmas, don't you?

Posted by Ginny Stiles at 7:51 PM No comments: 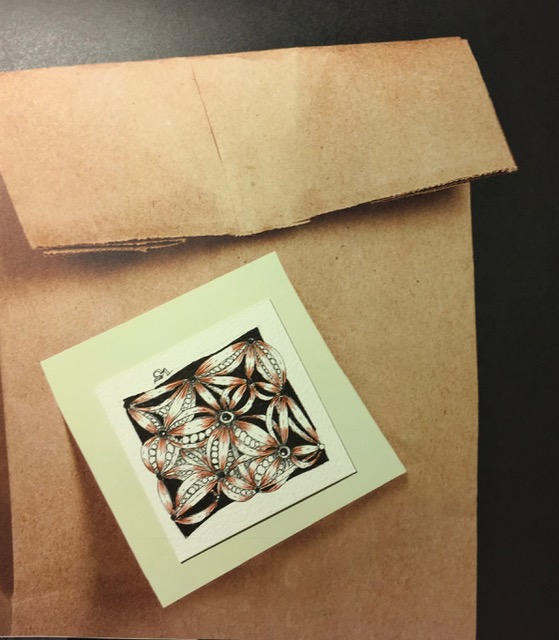 This is one of the newer tangles introduced by Rick and Marie (founders of Zentangle®) recently.  It is called "Rumpus" and is really quite fun to play with.

They have introduced a new "technique" they call "enthatching".
This is actually "shading with a pen" instead of with graphite.
This is done with the brown pen in this example.

Would you believe this is not really a paper bag above?
This is a "picture" of a paper bag and I just stuck my tile on it and took a photo.

During the holidays Rick and Marie (and Marie's daughter Molly) are sharing some delightful "how to" videos.  If you subscribe to the Zentangle.com newsletter you will be getting them too.

You can see this one drawn for you if you go to tanglepatterns.com and type click on "R" and scroll down to "Rumpus".

So now we come up on the 3rd Sunday in Advent...
Waiting is hard for me.  But then when Christmas Eve finally comes and I hear those words again...

"In those days Caesar Augustus issued a decree that a census should be taken..." and Luke tells us the story that is engraved on our hearts, then I remember why we wait.   I've heard it every year for over 70 years now.  And it's always new.

Below is a photo of my grandson in the Christmas pageant last year. He was 10.  And he was the only shepherd that saw the star. 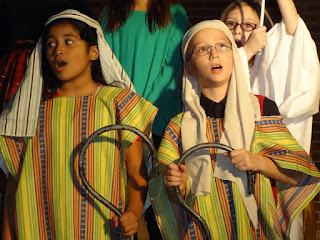 I wish the same for you.
Merry Christmas. 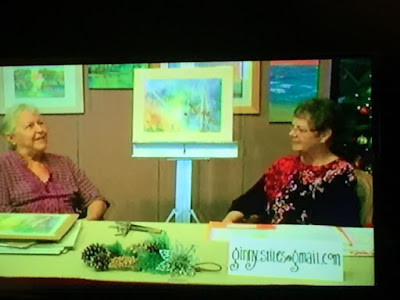 Thinking and talking about art...what could be more fun?  Yesterday it was my privilege again to interview on television one of the many great artists that live in our retirement park...Hawthorne Park.

This time it was Coralee Burch who teaches the watercolor classes here once a week.  (Everyone is a volunteer.).  Lucky us!!!  Wow.

We have some wonderful folks willing to share with us their time and talent each winter season in so many different medias...watercolor, acrylic, oil, china painting, pastel, colored pencil, and ink.

Once a month on the first Friday, I get to interview one of the participants and talk about their art, their backgrounds, their joy in expressing themselves in whatever media they love.    We talk about how we began our journeys and where they are headed now.
The half hour just flies by!!!

Our in-house TV is broadcast to the 1200 homes in the park.  One show each day of the week and then re-broadcast at a variety of times during that day.  So the programmers have fun with a wide variety of subjects.

Christmas is coming to our park now...decorations are popping up all over...lovely lights and trees.