Posted by Ginny Stiles at 3:20 PM No comments: 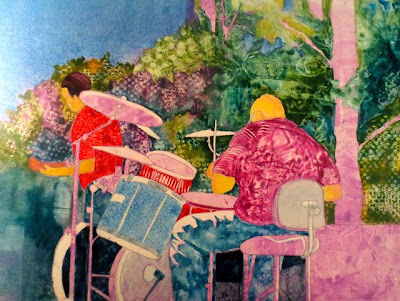 Watercolor on Yupo 14 x 20
This painting was photographed indoors under indoor lighting.  Not a good thing.  I will resend under natural light at a later date.  The skin tones all turned orange (which they are not).  But the other colors seem fairly close to what they are.  Also wc on Yupo dries very shiny so you cannot put a light directly over the painting or you get major glare!

I am thinking of cropping it slightly more than it currently shows.  Pulling in a little on left and right I think.  Carol thought so too.  But I will toss that around for awhile.

I posted this a few days ago partially finished.

But the colors are totally "intense" and that sort of comes out in the photo okay. This is partly the fun in Yupo!  I did this in Carol Ann Sherman's Yupo workshop yesterday at the Center for the Arts.  A very fun workshop...Carol is great and the others in the class were great too.  It was a sponsored workshop from Leesburg FL Art League.

I decided to post this today (even though not the best photo) because today I am going into Orlando to get my iMac computer operating system updated from Snow Leopard to Mountain Lion.  This is TWO upgrades.  BIG DEAL.  I am really nervous about this and am afraid that "things ain't going to work they way they are supposed to work" after this is done.

Sigh. So I decided to send all my newsletters and post all my blog stuff and Facebook etc this morning.  Then I will back up the computer and tidy up my desktop, etc. At least I'll be up to date.  I expect I'll have to sign up for at least two one to one workshops on how to use the new system! And the Apple store is in Orlando about an hour away.  Not too convenient.
Wish me luck!

Posted by Ginny Stiles at 5:10 AM No comments:

Zentangle and a Stamped Image

Posted by Ginny Stiles at 4:49 AM No comments:

The Yupo Process: Day 2 of Workshop 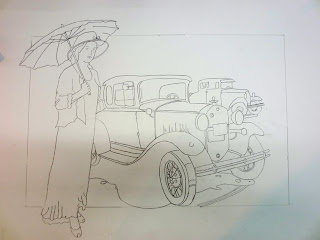 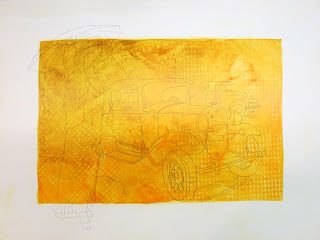 Posted by Ginny Stiles at 4:27 PM No comments:

Posted by Ginny Stiles at 6:13 AM No comments:

Posted by Ginny Stiles at 4:23 PM No comments:

Posted by Ginny Stiles at 7:08 PM No comments:

Posted by Ginny Stiles at 11:50 AM No comments:

Posted by Ginny Stiles at 6:12 AM No comments:

Well I am posting from my iPad today as am having some issues with my computer AGAIN. Sigh. Anyway.. The workshop today was great fun. Not nearly enough time in 3 hours. But we all worked hard. Zines are mini journals or little maga-zines. The 3-sided box at the left is actually a cereal box to use as a cover..and the zines are slipped inside and held by a rubber band! How cool is that?

We worked on stamp making with self stick foam, image transfers, collage, and book folding. The little books are all made from one sheet of folded paper! I'll share more later.


Posted using BlogPress from my iPad

Posted by Ginny Stiles at 4:48 PM No comments:

This "string" is FAR more complex than what I usually like to put on a tile...and much more geometric than I normally do.  But I like to try new things...that is what challenges are about.  This is a 3.5" tile.

Posted by Ginny Stiles at 3:12 PM No comments:


Posted by Ginny Stiles at 5:37 AM No comments: 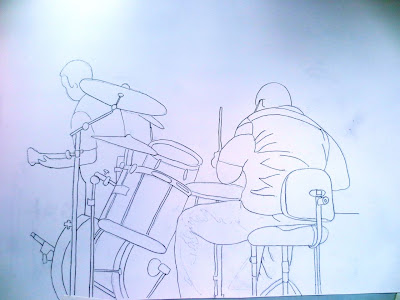 First off, this paper is not purple/blue/violet although it kind of looks neat that way.  It is just a fluke of how I tweaked it in iPhoto in an effort to help the "contrast".  In actuality at this point it is just graphite on stark white Yupo paper. This fairly large (half sheet of wc paper size.)

Those of you who have used watercolor on Yupo know the CHALLENGES of it.  It is a slick plastic surface and takes you way way out of the normal watercolor techniques.

I am totally a fan of George James techniques in this technique and have all his videos.  BUT Carol Ann Sherman is coming to Leesburg, Fl and so I bought HER video and have been watching it in preparation for the March 26-27 two day workshop.

Her style is quite a bit different than James although she uses some of the same tools.  In any case since it is such a short workshop I wanted to have my drawings transferred to the Yupo paper IN ADVANCE so I can spend more time listening, watching, and thinking about the application of color and paint.

One thing Carol does is put down a fairly hard line of graphite in her drawing with no attempt at erasing it. It becomes part of the painting.  AND because she puts down a ton of paint on this surface one needs a fairly dark line in order to "find your way" again.  Her first thing to do is cover the entire paper with a fairly opaque layer of paint.  Then she "eats out" the white areas.

I am going to put together two different drawings on the Yupo and also bring several smaller blank sheets for experimentation.  I took the photo reference for this at the Lakeridge Winery Music Fest (Clermont, Fl) last winter.  I was able to sneak around behind the band and take this rather unconventional perspective!

I'll be posting the creative process as it goes along.

Posted by Ginny Stiles at 5:14 PM No comments: 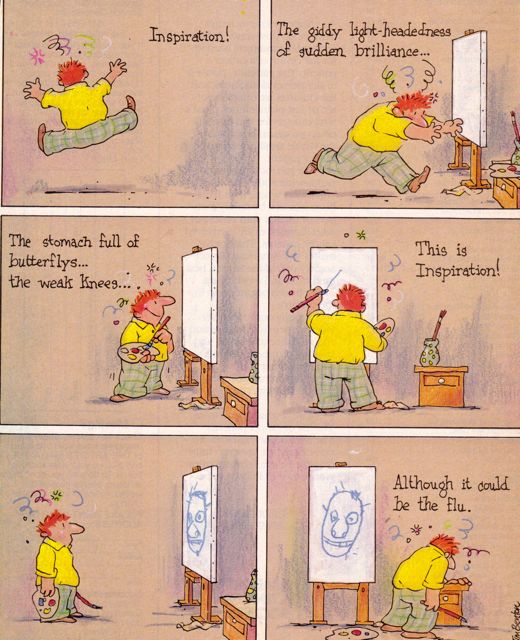 I wish I could give credit to the illustrator of this little cartoon.  But alas, any reference has long been missing. I've had it in my possession for over 10 years and I am sure it probably came from one of the Artist Magazines.  Many of them "used" to carry cute art cartoons, like this one, that humbled us and made us laugh at ourselves.  Alas, I rarely see any jokes/cartoons now.  What a shame!

If anyone know who the author/artist is, please let me know.  Otherwise..let it humbly take the place of my own art work today and help you to smile at yourself and all the rest of us who from time to time feel amazing inspiration.  Or not.

I have been busy preparing for a Teacher Appreciation lunch presentation here at Hawthorne Park in central Florida.  We honor our teachers and workshop leaders who are all volunteers at a nice luncheon the end of March each spring.

I am also prepping for a busy multi-media day at my friend, Cynthia's house tomorrow.  Where WAS all that, you know, ..stamps, rollers, mediums, papers,  etc etc.  Multi media folks are HUGE collectors of amazing "stuff". She is teaching a Zine Workshop on Friday of next week and I will post some photos of that too.

Posted by Ginny Stiles at 1:21 PM No comments:

Posted by Ginny Stiles at 5:20 AM No comments:

Posted by Ginny Stiles at 7:41 PM No comments:

Posted by Ginny Stiles at 7:42 PM No comments: 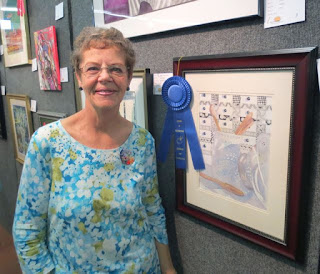 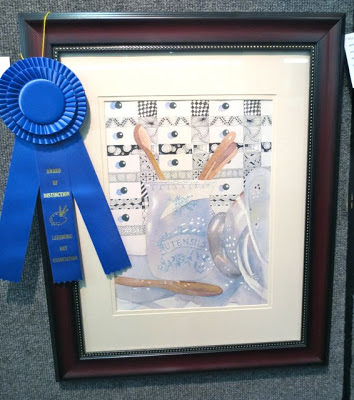 Saturday March 9th was a very special day!  The award reception for the Leesburg Art League spring show was held in the Center for the Arts.  The way the awards are given there is a Best of Show (gold ribbon).  Then the next two awards are called "Awards of Distinction" (blue ribbons) and then after that 3 awards of merit (red ribbon) and I believe several honorable mentions (white ribbons).

Each winner was asked to say a few words about their painting (which is what I am doing in the second photo).  A pleasant way to spend an afternoon!!!

The Muffin Series and WC Palettes to Go

I am into a "series" of Zentangles in the "muffin" shape right.  Go figure. 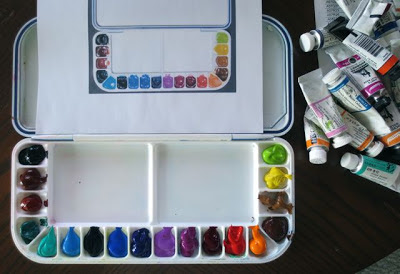 Brenda has been posting about her palette on her blog recently.  Those of us taking her class up at Dillman's in WI in June are happy to get a head's up on setting up a "similar" palette.  Just so happens that I already owned the same palette (although I was using it for gouache paints).  So I cleaned it out and started over.  I decided to add a few of Brenda's colors and then some of my own.  At the top is a print out of a Brenda's palette and below is my actual palette.

I decided to try a few new colors she likes (Holbein's Leaf Green looked so nice).  It is the first color on the right side...very leafy, right?  Thought I'd give that a shot.  I also added back in "Raw Sienna" which I really had given up using much in favor of Quin gold.  But she uses both.  So I dug out some I had...may be a little old and dry...we'll see.  I did not get her Marine Blue but opted for Antwerp instead as it a favorite blue of mine.  But am trying something called "Antique Bamboo" instead of Cobalt Teal.  She uses Veridian which I will try again...it's a lovely green for mixing but I find it dries up on the palette too quickly.  Otherwise the colors are similar to ones I use on my main studio palette.  She has a black on her palette...Daniel Smith's Lunar Black.  All I had in my bag was a Winsor Newton "Lamp Black" which may not work.  But I did put it on.

Brenda's blog is under my favorites so you can go click on that if you want more details.

Posted by Ginny Stiles at 7:10 AM No comments:

Posted by Ginny Stiles at 2:51 PM No comments: 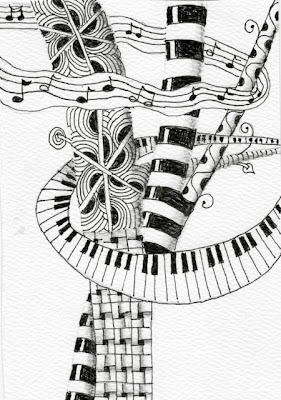 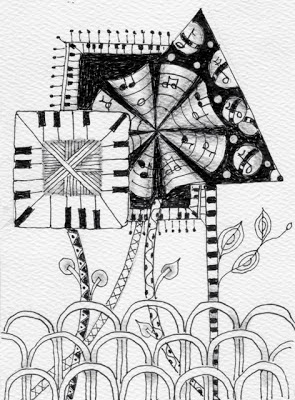 Her are my first two tries at coming up with cover design for the spring choral concert here at Hawthorne Park.

My themes are of course "music" and "spring".  The concert will include lots of different themes and I have decided not to try to include those in the design.

My only problem is that shading is so important to Zentangle design and the shading does not come out very well in the copy machine process.  So the designs may lose some of the punch in the copy process.  What do you think, Nancy?
Posted by Ginny Stiles at 6:34 PM No comments: 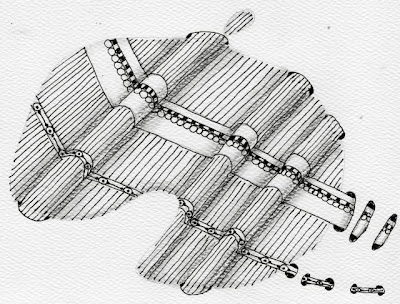 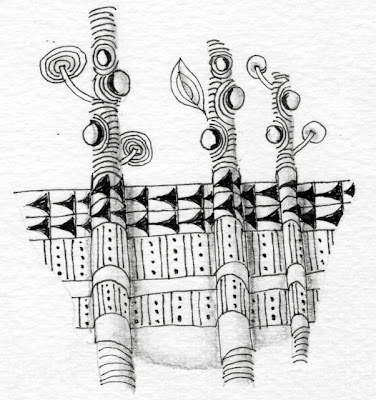 I think of this more as a kind of "string" to work off of.  I found the idea on Rick and Marie's blog.  I do not think they have a name for it.  It's just, as I said, a kind of "string" and you can put any tangle design into it that you want to.

I really like the illusion it creates and am having a lot of fun playing around with it.  It is highly dependent on the shading.