Posted by Ginny Stiles at 4:10 PM No comments:

Drawing the first ensemble to the close...

Posted by Ginny Stiles at 8:10 AM No comments:

Today is the Winter Solstice 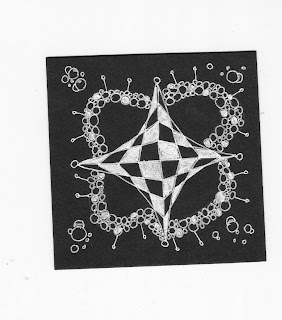 In the Northern Hemisphere, today is the winter solstice, the shortest day of the year and the longest night. It's officially the first day of winter and one of the oldest-known holidays in human history. Anthropologists believe that solstice celebrations go back at least 30,000 years, before humans even began farming on a large scale. Many of the most ancient stone structures made by human beings were designed to pinpoint the precise date of the solstice. The stone circles of Stonehenge were arranged to receive the first rays of midwinter sun.
Some ancient peoples believed that because daylight was waning, it might go away forever, so they lit huge bonfires to tempt the sun to come back. The tradition of decorating our houses and our trees with lights at this time of year is passed down from those ancient bonfires. In ancient Egypt and Syria, people celebrated the winter solstice as the sun's birthday. In ancient Rome, the winter solstice was celebrated with the festival of Saturnalia, during which all business transactions and even wars were suspended, and slaves were waited upon by their masters.
Henry David Thoreau said: "In winter we lead a more inward life. Our hearts are warm and cheery, like cottages under drifts, whose windows and doors are half concealed, but from whose chimneys the smoke cheerfully ascends."

I love being reminded of the history behind some memorable moments.  30,000 years is a long time, huh?   So the roots of our feeling somewhat cheated on daylight today come from a LONG time ago!

One of the church study groups planned at our UCC church this winter has to do with how the minds and intelligence and knowledge that we have accumulated since the men (and they were mostly men) wrote down their sermons and letters in the Bible have evolved.  It is called "Painting the Stars".  Although the word "evolution" can be sometimes a trigger word for some biblical discussion...what is planned for discussion here is more about "evolved" knowledge about our world, our universe, our place in the universe, and our scientific views (although of course still limited).  How does this new knowledge impact our understanding of what was written back then.  Should be an interesting discussion.

The lighting of bonfires to tempt the sun back (as mentioned above) came way before the Bible, of course, but I can understand their concern!  And now that we know more about the sun as a star, we know that they were not so far off in that worry for now we know that the sun is actually finite and that in some far distant future it will be gone.  Or so scientists think at this point in time.  So lighting a few bonfires to "tempt" the sun to come back is not such a bad idea after all!  :-)

Posted by Ginny Stiles at 7:38 AM No comments:

Ensemble: five tiles out of nine

Posted by Ginny Stiles at 8:01 PM No comments:

Posted by Ginny Stiles at 5:00 PM No comments:

The money to purchase these cards goes to help children with disabilities.   You can read about Courage Cards here.  Being selected (or juried in) to the Courage Cards artists is an amazing honor.  I am so proud of Sharon!  Consider this idea yourself another year or pass this idea on to other artists and consider purchasing some cards for a worthy cause.

And you can go directly to Sharon's card here.

Sharon Feathers, Ringle, WI. Sharon's interest in art developed after her professional career as a teacher. Retirement has since given her the time to pursue her interest in art, and her travels have given her the opportunities to take beautiful photographs which she uses as reference for her paintings. Sharon believes art is a personal statement about how we perceive the world. It is a point of view. It is a statement of what we want to convey to others. That means being in the moment of your surroundings. She says, "I am always looking for that found moment to capture." Sharon has received many awards and honors for her art and her work can be found in many galleries and exhibits.

Posted by Ginny Stiles at 4:57 PM No comments: 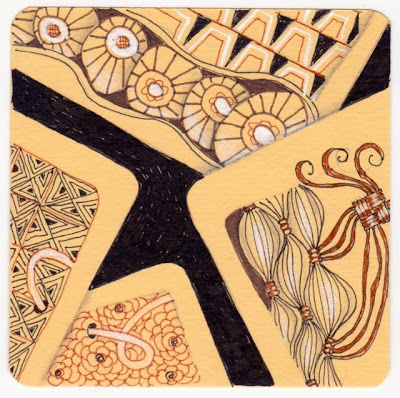 I am enjoying playing around with the sort of new idea that Maria has put on that we try some Renaissance tiles. That is working with brown and white and black inks with white pastel pencil.