Admiring the Tiny Flowers of Early Spring in the Northwoods 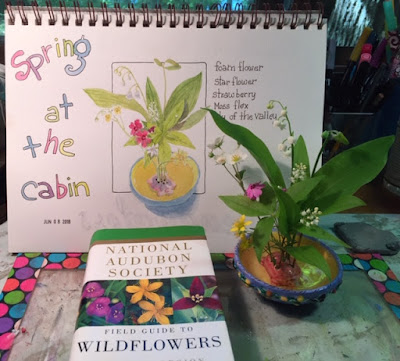 A watchful eye in the northern part of Wisconsin bring a few little jewel flowers into view.  In southern WI where I spent much of life...the spring wild flowers are bountiful...trillium and bluebell and jack in the pulpit.  But up here the summers are so short and the snows last so long and temperatures are never flagrantly warm.  So the wild flowers have a tougher time.  And it's SO shady in the forest that they have a very short window of time.

What I find is rarely wildly colored in spring.  One exception is the pinkish violet moss flox that appears right about now and spreads like ground cover usually along the roadsides (verges) where there is the most sun.

I get some lily of the valley but these are not strictly wild.  They were planted from original flowers taken from our beloved Seven Mile House in southern WI before we sold it more than 20 years ago now.  Like old friends that pop up "just to say hi".  Greg brought a few iris that may have been from there too and they pop up for a few weeks in June out by the road in the sun too.

The true wildflowers in our woods are the star flowers and the foam flowers...tiny white little jewels.  They are quite prolific right now.  And a few wild strawberries on the lakeside of the cabin which if they bear any fruit later, get eaten by the birds and chipmunks. 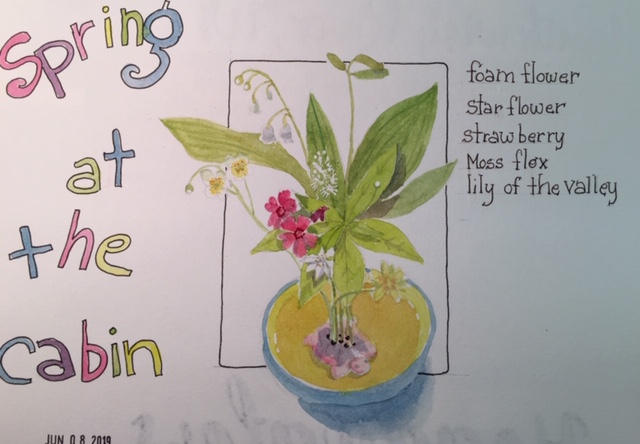 The tiny bowl in which they reside is a gift from an old old friend now long gone.  Jean Morgan.  Old friends and family will recognize the name.  Jean and her husband, Bill, lived in a big old house on the Yerkes Observatory grounds where Bill was a resident professor of astronomy.  Jean was a retired professor of education in Chicago when I met her.  She and Bill loved nature and particular flowers.  This little bowl was particularly suited for tiny flowers...just a few inches in diameter with a tiny little turtle in the center to hold the stems.  The cabin is just the place for it.