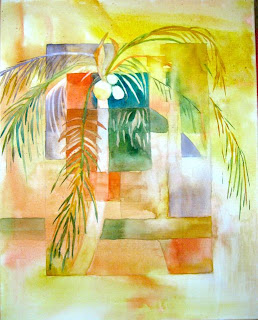 We all arrived in a downpour at the Center for the Arts in Leesburg, FL for Peg's class. But by noon it was hot and sunny again!
Many there had not painted on canvas before. Peg talked alot of about using canvas. Several brands are available and they are all slightly different. Fredrix WC canvas got into the game early and have patented the name WC canvas. But there are others now: Paramount, Yes, and Edge were 3 others she mentioned. All are available in the online mail catalogs. She mentioned she gets her's at Jerry's Artarama.
I worked on two different ones. The palm tree was a 16 x 20 gallery wrapped canvas by Paramount.
And the little boat scene was an 11 x 14 YES canvas on board. The Paramount required that I scrub the surface before priming in order to reduce the "puddle" effect of the coating.
But YES canvas on board should not be scrubbed (which I did not know) as it is cheaper and the scrubbing removes all the sizing and then the watercolor "bleeds". 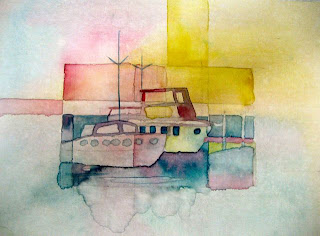 Lucky for me, the subject matter of the smaller painting made the "bleeding" issue just part of the watery look. I have already made some changes to the boats...adding darks and making a connection to the edge at the bottom. More photos later.
Although I have worked on canvas many times before...I learned SO much in this one day workshop. 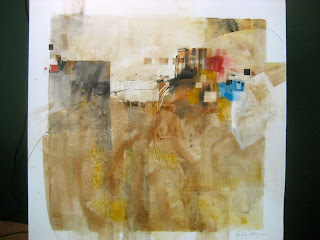 Peg has been working a lot lately on abstracts. This was one she brought along to show. Check out Peg's website gallery for a variety of subject matter.
She will be showing in the Mt. Dora, Florida Art Show the first weekend in February.
Posted by Ginny Stiles at 4:21 PM