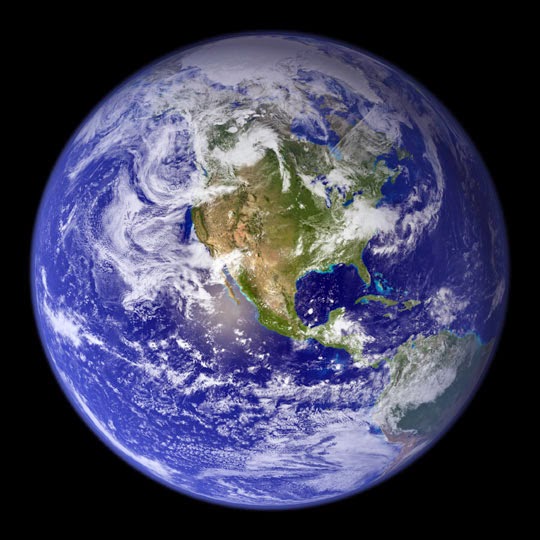 It was on this day in 1972  (December 7) that astronauts on the Apollo 17 spacecraft took a famous photograph of Earth, a photo that came to be known as "The Blue Marble." Photographs of Earth from space were relatively new.
In 1948, the astronomer Fred Hoyle said, "Once a photograph of the Earth, taken from the outside, is available - once the sheer isolation of the Earth becomes plain - a new idea as powerful as any in history will be let loose."
The photograph captured on this day 39 years ago was the first clear image of the Earth, because the sun was at the astronauts' back, and so the planet appears lit up and you can distinctly see blue, white, brown, even green. It became a symbol of the environmental movement of the 1970s, and it's the image that gets put on flags, T-shirts, bumper stickers, and posters.
The crew of Apollo 17 was about 28,000 miles away from Earth when they took the Blue Marble photo. It was the last time that astronauts, not robots, were on a lunar mission - since then, no people have gotten far enough away from Earth to take a photo like it.

Thanks to Garrison Keillor's daily blog for this snippet.
Posted by Ginny Stiles at 6:48 AM