A little train and a few Wonkies

Trains plays a role in my life, as you may note, since hubby is a big train buff.  The Folkston Funnel Train Watching station is in GA.
It just happened to be on the route back from SC after Christmas.
Funny how that worked out.

We bought a picnic lunch to eat there and did get to see two trains pass by at the same time each going the opposite direction on separate tracks, thank heavens.  The graffiti was amazing.

Across the street from the picnic area was an old yellow caboose from the Chessie System.  (Chessie is a cat).  Apparently you can visit the car and see the inside but we didn't have time this trip.

The signature symbol of the Chessie System was its "Ches-C", a large emblem incorporating the outline of the C&O's famous "Chessie" the kitten logo. The Ches-C was emblazoned on the front of all Chessie System locomotives, and also served as the "C" in "Chessie System" on the locomotive's flanks, and on other rolling stock. The Chessie System itself did not own any locomotives or other rolling stock; rather, equipment would be placed on the roster of one of the three component railroads. While all three companies shared a common paint scheme of yellow, vermillion, and blue, actual ownership of the equipment was denoted by the reporting marks C&O, B&O, or WM. 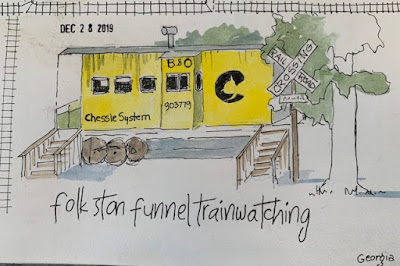 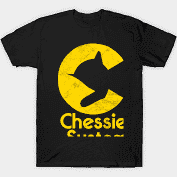 We didn't stay too long watching...it was our 3rd time to visit Folkston Funnel.

On a completely DIFFERENT note...my Zentangle Reunion will take place tomorrow afternoon at the Hawthorne Park Art room here in Leesburg.  We'll be making those crazy Wonky Houses that Margaret Bremner got us started on quite some time ago.  (I've posted those already) There are 21 people signed up for the class.  So friend Maureen is co-teaching with me.  She has done a lot of the prep work for it too!  Thank you Maureen!

Along with the houses I am giving every student the traceable figure of a Wonkie who lives in the Wonky Houses.  They are an optional fun tangling project.  My idea is that we'll bring our houses and Wonkies back together again for a show and tell at the March 1 Art show...and have a display table of all the houses.  These will look fun scattered among the houses. 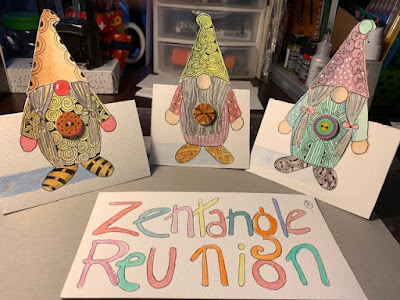 I teach classes Nov-May in Leesburg, Fl and June-September in Minocqua, WI

Ginny Stiles
Leesburg, Florida, United States
I live in Leesburg, FL (all winter) and summer for a few months in Lac du Flambeau, WI. I teach watercolor, mixed media and Zentangle classes and I do sell my art.