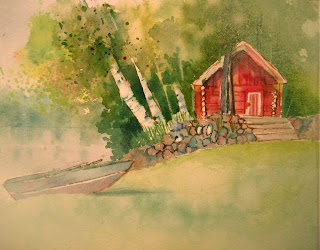 I spent an hour or so touching up the en plein air sketch that I blocked in yesterday. We all got rained out about an hour or so after we started. But I had a photo (see yesterday's blog post). The hard part about this was the "mystery paper". I had picked up something out of my folder of wc paper and it was already cut into quarters and so the brand of paper was missing. It was 300# but I have no idea what it was. Although I rarely buy anything except Arches, now and then for a class I might get a Canson, a Fabriano, or something else. This had absolutely NO sizing on it and everything just "soaked" in. Blah. It was SO hard to work on. If I'd only known! What a challenge! 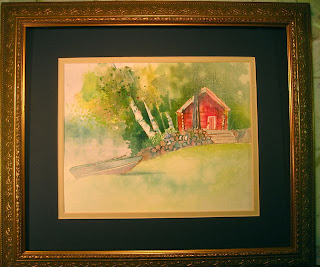 Trying to get the gouache to work as a gentle blend-off of color (John Lovett style) on this absorbent paper just would not work. I tried several times. It just disappeared. I finally dried it thoroughly and used gesso which laid on top a little better.
The little "cabin" at the Discovery Center had no windows (probably storage?) which I think now looks a little odd. I can always add them later. I decided to leave them off because the little building is a "landmark" and is recognizable to people who go to the center.
Posted by Ginny Stiles at 10:00 AM