Milledgeville, GA on the trip north 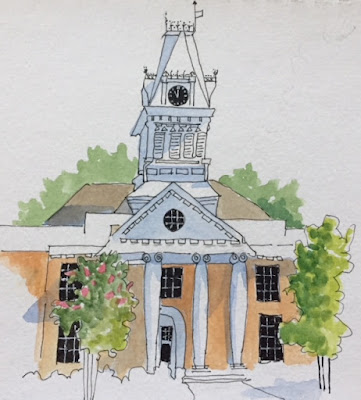 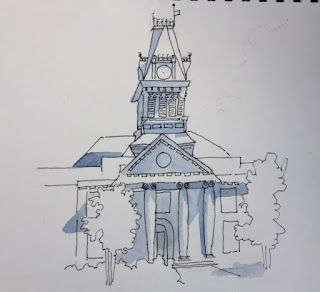 So here is my first sketch on this trip starting with Milledgeville, Georgia on the first leg of our trip north. Part of an antebellum trail with beautiful old homes and buildings.

OH my gosh it was hot when we got there!  96 degrees was the REAL temp.  I got to this building about 10 am and it was already 90 by then.  So I did the the ink sketch with the shadows and gave up.  NO way, even in the shade I could sit there any longer.  Whew.
I started to feel light headed from the heat!

I took a photo and filled in some color later.
Later that afternoon our car temperature gauge read 100 degrees as we headed to SC.

This building is the old Baldwin County Courthouse with an "empire" clock tower.  Used as the capitol building from 1806-08, it burned in 1861.  Rebuilt and in 1886 it has been enlarged several times after that and is used primarily by Georgia College now.