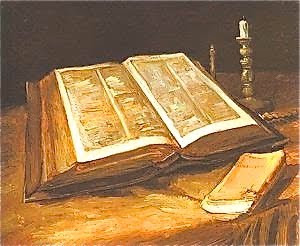 I've been a Van Gogh fan forever.
Here's painting of his I had never seen before.
The title is "Still Life With Open Bible".
In an article by Tom Lubbock from The Independent (in Great Britain) I found this fascinating review of this painting. (written Jan 1, 2010) The Royal Academy of Arts in London has a Van Gogh exhibit ongoing now through mid April.

.....there are also those paintings that depict words – whose subject matter includes a piece of verbiage, whether written or printed. This is done in two ways. In one, the words are depicted literally, legibly, transcribed letter by letter. If the subject is handwriting, for example, the painter is almost recapitulating the action of the writer.

The other way is tonally. Here the words are no longer readable. The letters have retreated out of visibility. They've been reduced to areas of indecipherable grey. Paintings of newspapers often use both ways of depiction. The headlines are big and letter-by-letter legible. The smaller print of the stories becomes blocks of blur.

Van Gogh's Still Life with "Open Bible" is a picture that does text in both ways. Two books lie on a table, at a slant to one another. One is heavy and huge. It's a family bible, with brass clasps, open in the middle, and you can read at the head of the page where we are: Isaiah, 53. These pages hold a famous passage ....... "He was despised and rejected of men; a man of sorrows, and acquainted with grief..."

The other book is lighter reading. It's a small and well-thumbed paperback of a contemporary novel. The volume is closed, and we can read on its cover the author and the title fairly clearly. It's Emile Zola's Joie de Vivre. The man of sorrow. The joy of life. Some kind of drama is being staged between these two books – both between their very different physical presences and between their legible verbal content.

But now turn to the actual words of the Bible, and consider how they're painted. They're obviously not legible. You may know what the Isaiah says, but you certainly can't read it in this rendering. The text is depicted in the tonal manner. Columns of print are made into panels of blur. The paint breaks up into brush strokes here and there. You have a vague sense of chapter and verse.

It's very vague, though. This tonal version is beyond mere dark and light. This blur goes further than any loss of focus. There is no suggestion that a readable page only just eludes us – that with a little magnification, with slightly higher resolution, the viewer might become a reader. The body of the text has been transformed into rough, dense, opaque blocks of paint.

This Bible is open. We're confronted with its pages. But that only emphasises how there's no way through Van Gogh's paint to Isaiah's prophecy. His voice has been translated into thickly pasted pigment, into fat streaks and slabs, closely packed gestures going both up and across. The gap between what we see, and what's meant to be there, is wrenching.

Is the effect sceptical, telling us that the old message is beyond us, that its preaching is only dead matter? Or is it expressive, giving this passage a more than linguistic power, filling it with a physical force? The painted word is the word made flesh?