Seeing a Door in a New Way 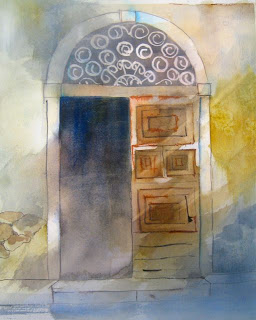 We had a busy day 3 and John demo'd two paintings. The first picture is my interpretation and the second is his demo. Since I took the photo, I've already dithered this painting some more (and so has John dithered with his).
One of the techniques in this demo is "gouache resist".
Gouache: gouache |gwä sh; goōˈä sh |
noun a method of painting using opaque pigments ground in water and thickened with a gluelike substance.• paint of this kind; opaque watercolor.• a picture painted in this way.
ORIGIN late 19th cent.: French, from Italian guazzo.
Anyway, the curlicues in the upper doorway are painted in gouache. Well, first a light wash. Dry. Then paint with white gouache. Dry. Then paint over entirely with a dark color. Dry. Then with a sprayer of water spritz off the layer of dark paint that rests on the gouache. Gently. 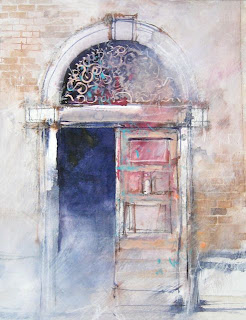 John has used a layer of light guoache also in the right hand corner to "mystify" that corner. I did it in the left corner but obviously I need to do it again more heavily.
This technique can be done with gesso (permanent) or with gouache (not permanent). Both require whisking the area with a soft dry brush.
I'll share the second painting tomorrow because I really was not anywhere finished with mine at 5 pm when I officially became brain dead.
Incidentally, the tiny bits of color in John's upper door is water soluble crayon.
Posted by Ginny Stiles at 6:15 PM