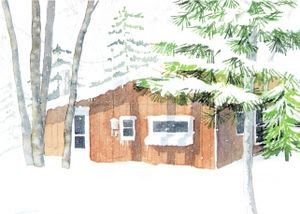 Today is St. Nicholas Day. St. Nicholas lived in the fourth century, and he was the archbishop of Myra in Lycia (which is now Turkey). There are all kinds of stories about him, but one of the most famous is that there was a poor man who could not afford a dowry for his three daughters, which meant they would have to be abandoned to prostitution. St. Nicholas didn't want to humiliate the man by giving him charity in public, so he left purses of gold in the man's house at night — according to one version of the story, he dropped them down the chimney, and in another, one of the daughters had set out her stockings to dry and the gold was put in them. And so St. Nicholas, the bringer of anonymous gifts, inspired Jolly Old St. Nick, Father Christmas, and Santa Claus. St. Nicholas Day is celebrated in many European countries and in American cities with German influence like Milwaukee, St. Louis, and Cincinnati. On the evening of December 5th, children put out their shoes, and on this morning, they wake up to find those shoes filled with small gifts from St. Nick — chocolates and cookies, fruit, marbles or other small toys.

note: this is a watercolor I did a few years ago of our north woods cabin in WI as I "imagined" it looked under snowfall (I have never been there when it snowed!) 11 x 15 on Arches 140# cold press. I read it is snowing like crazy up there today!!!