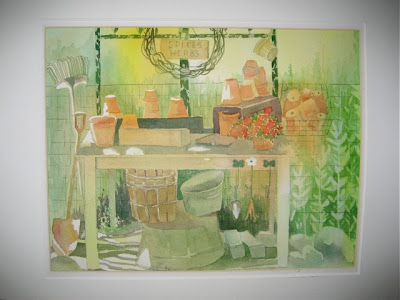 I chose a mainly green painting for today...a favorite that I did in watercolor a few years ago that is now hanging in a dear friend's home. I snapped the photo reference for it one summer day at a garage sale in Wisconsin...the folks had a lovely yard and while Greg was digging through some bin, I snapped photos of their garden center behind the garage. It is such a warm painting and I love the stillness and inviting composition. 11 x 15 on Arches 140 cold pressed.
A bit about St. Patrick......who was actually born in Britain...
St Patrick wrote that he would have loved to go home to his family and his country, but that it was his duty to remain in Ireland, converting people to Christianity and baptizing them. There were few Christians in Ireland at the time, so Patrick tried to integrate traditional beliefs with the new religion, and legend has it that he introduced the Celtic cross as a way to combine the Christian cross with a symbol of the sun. Another legend says that he used the three leaves of the clover to explain the Trinity, which is why shamrocks are a symbol of St. Patrick's Day. And March 17, Patrick's Feast Day, has been celebrated as a religious holiday ever since. He died in 460 so we are talking a LONG time ago.

But the green clothing and all-out festivities of St. Patrick's Day are largely a product of the United States. The first St. Patrick's Day parade was held in New York City in 1762 by Irish immigrants. These days, about 3 million people line up to watch the parade in New York, and there are similar huge celebrations in Boston, Philadelphia, and Chicago, where they dye the river green.