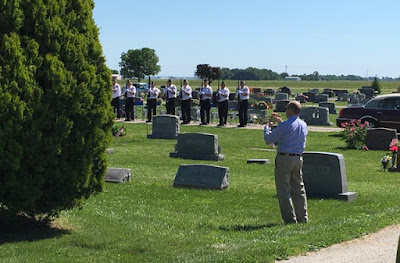 Arcola, Illinois is south of Champaign, Illinois in the middle of corn and soybean country.  My friend Carol grew up in this area (in Decatur nearby) and had grandparents and other family members in Arcola.  With a population of about 3,000, everyone knows everyone.  She her hubby have purchased the little home you see below for their summer stays but still winter in Florida.  And she still owns farm land which she rents out to local farmers.  We drove around to see her many acres just beginning to sprout up.

We attended the town's Memorial Day ceremony at 10 am this morning.  It felt so much like the one I attended many times in little Williams Bay when my kids were growing up!  Although this was held at the cemetery.  The national anthem sounded sweet sung by a local high school senior and presentations, prayers and a short patriotic speech by a local judge.  The ceremony ended with taps and I was reminded that I was spending a lot of time in cemeteries on this trip north!

Arcola is also the home of a large Amish community so you meet buggies on the road and we stopped to buy strawberries from an Amish family in the afternoon on our way to eat a hearty buffet lunch at an Amish restaurant.

Arcola is somewhat famous for the Lawn Rangers, a "precision lawn mower drill team" that marches in formation with brooms and lawn mowers while wearing cowboy hats. Every year since 1980, the Lawn Rangers have marched in the Arcola Broom Corn Festival Parade. The event, held the weekend after Labor Day, honors Arcola's position in the late 19th century as a center of broom corn production. The Lawn Rangers were so named because the Grand Marshal of the Parade in 1980 was Clayton Moore, famous as the Lone Ranger, and they were named in his honor. This unique custom was publicized by humor columnist Dave Barry, who marched with the Lawn Rangers in 1995.
Arcola was the birthplace in 1880 of John Barton Gruelle, or "Johnny" Gruelle, who is famous for creating Raggedy Ann and Raggedy Andy, the loveable American dolls and storybook characters. Gruelle used artistic skills learned from his painter father Richard Buckner Gruelle combined with his self-taught writing skills to create stories expressing regional values and aesthetic images. His artistic granddaughter, Joni Gruelle Wannamaker, manages the Raggedy Ann Museum in Arcola. 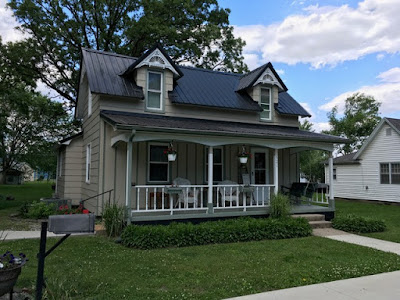 I loved driving around the residential area of the  little town with huge shady oaks and amazing old 2 and 3 story Victorian homes.
But typically if you just keep to the highways this is what you would see of Arcola...just a lot of grain elevators.

It was a very lovely day and around 3 we headed off to Woodstock, Illinois for the night.