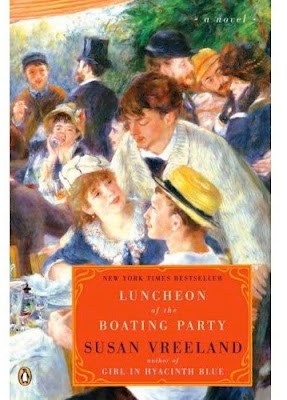 It's the birthday of novelist Susan Vreeland, (books by this author) born in Racine, Wisconsin, in 1946. She grew up in California, became a teacher, and for 30 years she taught English and ceramics in the San Diego public schools. She wrote a book called What Love Sees (1988), based on the true story of her parents' friends, a couple who were both blind but who managed a ranch and raised children with the help of a Seeing Eye cow. But she was also busy with her teaching, and for a while she wrote occasional stories or articles, but not much else.

Then, in 1996, she was diagnosed with lymphoma. She had chemotherapy and operations, and for a few months she couldn't do much but read, and even that was hard for her. So instead, she paged through art books, and she especially liked Vermeer, whose paintings were so calming. She needed more treatment, and she had to take off another year of teaching, and so she started writing stories based on Vermeer. Vermeer only painted 35 paintings, and so Susan Vreeland imagined that he had painted one more, and she wrote a story about that, and then several more stories about Vermeer and the imagined 36th painting and the people who owned it over the years. She said, "My goal at the time wasn't to create a novel that would make it out in the big world. It was to have enough time left in my life to finish this group of stories and print out 12 copies, so my husband could give them to members of my writing group so they'd have something to remember me by." She did finish them, and she turned them into a novel, and a tiny publishing house in Denver agreed to publish the novel, Girl in Hyacinth Blue (1999).

Girl In Hyacinth Blue was a best-seller, and Penguin bought the rights. Vreeland got better, and now she had an audience for her work, so she wrote four more novels centered around art, including The Passion of Artemisia (2002) about one of the first influential female artists, Artemisia Gentileschi, and most recently, The Boating Party(2007), about Pierre-Auguste Renoir. Both novelswere New York Times best-sellers.

I reviewed The Boating Party earlier this month as a friend had recommended it and I was so enjoying it. Then today Garrison Keillor's podcast had a happy birthday for the author! When I read about the other books Susan has written and about her life, I felt moved to give her a tribute on my blog this morning. What a woman to overcome her illness with pushing ahead to write despite a dim prognosis and then a happy ending that she is loved and gets better and writes more! Go Susan! I am definitely going to read more of Susan's books!!! (Incidentally Racine, WI is just an hour away from where I lived for more than 20 years!).