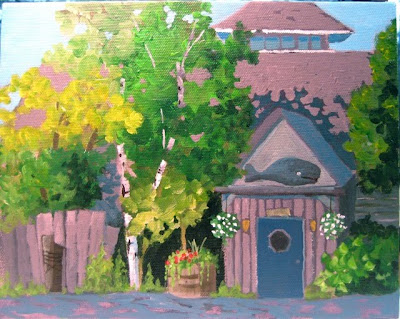 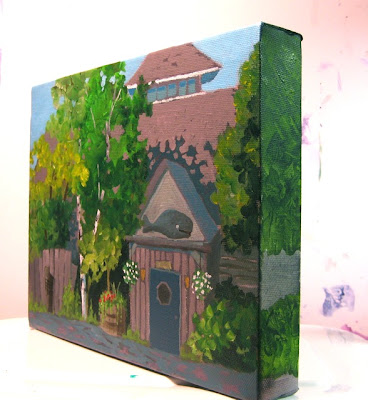 If you scroll down to yesterday you can see the two steps I photographed then: blocking in and then the way it looked after two hours.
When I got it up on the blog yesterday (which is a nice way to see if from a distance) I could see there were not enough value changes and I wanted that whale carving over the door to show up.
I liked the basic shapes I chose but I felt the whole painting was too dark. The day was slightly overcast...bright overcast but enough to have shadows so the sky was grayed down. Later I decided to forget that and brighten up the sky and make the shadows a little more distinct. And speaking of gray...my grays are a tad on the purple side. Which is okay. But I am practicing making grays in acrylic and I was using Robert Genn's formula: white, black, a touch of magenta and a touch of yellow ochre. And he means a "touch". The overuse of the magenta is what is making these grays too purple. I need to learn what a touch means. :-)
In the first photo it looks like the sky is two different shades of blue but in the second photo it seems to show up correctly. I think it was just the way the light was hitting it...it's pouring rain again here so everything is artificial light again.
The funky little posts the restaurant had to the left on the painting "read" as part of a tree in the first paintings so I fixed that and brightened up a few places on the birch and on the yellower leaves. I extended the roof line off toward the left.
It isn't signed yet...I am working on the wrap-around edges yet..a few more touches on that. Some folks just paint their edges in a neutral color (like black) but I like the picture to carry around. And I like to do that before I clean up my palette..while the colors I used are all still there!
Posted by Ginny Stiles at 11:07 AM