The California Journal Draws to an End 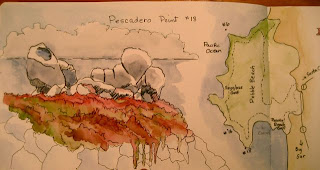 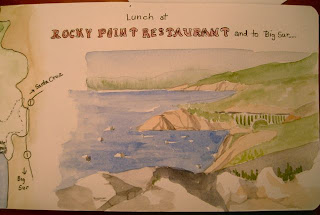 These are two of the last 3 journal entries for the trip to California last week.  As you can see they are side by side with a map of Pebble Beach drawn across the seam in the Moleskin journal.  Pescadero Point was covered with this amazing red/green ground cover we saw all over the coastal area.  Does anyone know what it is called?  Up close it was a kind of thick stiff grass-like plant.  Obviously salt tolerant!  It ran over the edges of the rocks and gave the rocks such a nice contrast!
The opposite journal page was done from a photo afterwards because it was SO windy at the point where we stood that no way could I paint there.  But we all loved the bridge that we had just driven over and I wanted to show it tucked into the craggy landscape.
The map shows the points at which I painted.  The journal also mentions that we stopped at Rocky Point Restaurant for lunch after the bridge and had THE most fantastic view from there right over the crashing waves.  We were all starved by then too.  The last journal was from the Hearst Mansion which was our furthest southern point on the driving trip.  Stay tuned.
Posted by Ginny Stiles at 8:31 AM