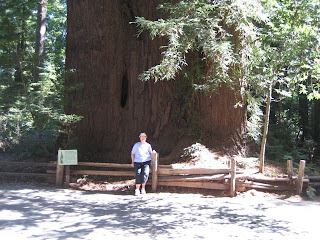 I sketched this redwood while turning my landscape style moleskin watercolor sketchbook lengthwise. The object was, to try in a humble way, to get some of the height into the painting.  (you can probably just see the seam of the stitched book across the middle of the painting.)
Henry Cowell State Park near Santa Cruz, California is one of those rare jewels that you just feel that you have been gifted with when you come upon it.  I have heard since, that there are numerous parks and places to see sequoia and redwood in CA.  But one of the special things about this first generation stand of forest is that it is not as well known and just far enough away from San Francisco to avoid the huge crowds.  The paths are sandy here (not black-topped) and people come by in small groups or alone or as a runner.  We spent over an hour here and made the loop of almost level land which was so easy to walk.  There are other parts to the park but we just stayed on the "old growth redwood trail".  There are lots of things to do there as well as camping facilities.
This was an extremely quick sketch (about 20 minutes at tops) and I used a #6 Simmons watercolor brush and my Cotman field kit.  I did a light graphite sketch first.  The bench at the bottom was important for scale, of course.
This old growth trail smelled just like the inside of a cedar closet. Exactly. I kept taking long deep breaths (which is good for you too!) Someone suggested I was smelling the Bay trees which also grow between the redwoods.  But I am not sure if that was so or not.  Anyway, it was a mystical spot.  A huge "tree cookie" was hung there that had been cut in 1934.  And on the rings...I kid you not...was the birth of Christ.  Toward the outside rings the Declaration of Independence was marked.  You feel very small in a place like this.
Posted by Ginny Stiles at 11:08 AM