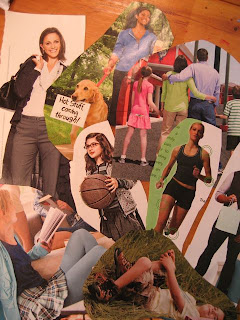 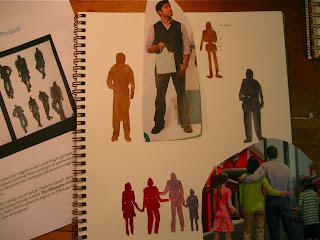 Donna Zagotta has started posting her challenge to herself to improve on her figure drawing.  Since she is already a pro at this one wonders where this will all lead!!!  But for one thing it leads the rest of us to better drawing and painting if we follow along.  She calls her project the Silhouette Project and I think she has done two posts about it at this writing.  Myra Wacknov has picked up on the challenge and she is posting her work on this subject too.  She found a Gap ad with darling figures to use.  WHERE did she find that?  I started out, as Donna suggested, by cutting out a lot figures from magazines and made a pile of those.  Then in an inexpensive sketch pad of watercolor paper I started in tentatively.
You HAVE to go to Donna's blog to see the original two posts on this so you get started correctly.  But look at Myra's too for her fun additions.  Both of them are planning to challenge themselves with quite a few of these silhouettes!  I am not sure yet...They don't take long too do but they do take concentration.  My goal is to do at least 5 every time I go into the studio and before I do any other work..for the next month.  Then I'll see where I am at!
ps...trivia: The word silhouette is an eponym of Etienne de Silhouette, a French finance minister who in 1759 was forced by France's severe credit crisis during the Seven Years War to impose severe economic demands upon the French people, particularly the wealthy. Because de Silhouette enjoyed making cut paper portraits, his name became synonymous with these portraits and with anything done or made cheaply. Prior to the advent of photography, silhouette profiles cut from black card were the cheapest way of recording a person's appearance. (Wikipedia)
Posted by Ginny Stiles at 6:26 PM